This is kind of an emotional blog this month.  As you know from last month we headed off to Key West just prior to surgery.  Surgery happened and since then I have been home on bed rest for the past month and still have another month minimum to go.

In the midst of all of that Hurricane Season kicked off with a major destruction of Houston and Beaumont, Texas and various areas around it.  I was glued to my TV and Cellphone as my Finance Officer has family living in Beaumont and I have some photography friends living in the area as well.

Move forward 2 weeks and we have Hurricane Irma forming in the seas, heading over the islands and heading to the east coast. As a Cat 5!! Yikes!! So Sunday I tell Richard to head out to Publix and get water and a list of things.  I also suggest that he fills my car with gas and certainly keep his topped up.  So my wonderful husband comes home with 1 case of water and 2 jugs, and I am thinking “what!!”  I politely ask him if that is for him or for me.  Water does not last in our house and so 1 case will be finished pretty quickly if we have no water.  Okay, Okay, I cannot do a thing about it as I cannot drive and am pretty much stuck to the bed.

Each night he comes home and slowly starts putting up the shutters, grumbling along the way that he is too old to be climbing to the second story of a house and do I know that there are 78 panels of steel that have to be put up, along with all the tracks in the flooring to bolt the shutters in.  No I didn’t but I will humbly submit that this man worked like a Trojan and I am so appreciative of that. By Friday most of the shutters were up.  We had decided that we were going to stay home and ride out the storm.

On Thursday, the storm starts showing signs shifting west.  So now we have gone from the edge of the storm, to directly in it’s eye.  Not happy here, we have done the eye wall before it is not fun.  So the screening gets tied down on all edges.  The fences get secured on our side and the neighbors side ( we lost both the screening and fences in the last hurricane – Wilma 2005).  All the while Irma is rolling through the Caribbean Islands battering every aspect of the residents lives.  Around Cuba the cone changes yet again and the storm now shifts to the west coast.  We are out of the eye but now we sit on the dirty side of the storm.  That means wind, rain and, oh yes my favorite, tornado.  I freak out about tornado.  That is more scary to me than a hurricane.

Friday I spent as much time as I could (using my office chairs upstairs and my wheelchair downstairs) going from window to window stuffing towels in the window area to stop any water coming in.  Fortunately the shutters prevented that but the one window that we did not have shuttered allowed a lot of water in.  Oh yes, I did not mention we have a set of windows in the upstairs bathroom that does not have shutters, it is too high to reach.

For the first time I also created a safe room in our downstairs bathroom.  That is the only room that does not have external walls. Here were my priorities, camera and lens, back up drives, computer, cell phone, ipad, 3 days change of clothes, 3 days of basic food, and the one case of water that Richard bought, along with Simba.  His crate was in the laundry in case I needed to crate him.  Now you are probably thinking I am freaked out by now.  Ironically not so.  I was calm.  Rich and I chatted about this and there were a number of factors.  One I could not do anything, so it kept me out of the mass hysteria at the grocery store and the gas lines, and two, we do have not kids in the house anymore. So we were at peace.  It will be what it will be and we are going to ride it out.

Hurricane Irma shifted more west and then it went right over the Florida Keys, decimating and devastating so many lives.  As the storm rolled in we “battened down the hatches” and rode it out.  The constant tornado warnings were stressful but overall we had dodged a bullet.  But it was with intense sadness that we have watched the news and seen the devastation in the Florida Keys.  Key West was flooded and homes, boats, trailer homes, and businesses on the various islands have been destroyed.  In many cases there are no homes to go back to.  My heart is burdened for not only the people of the Florida Keys, but to those on the Caribbean Islands and to all those folks who have incurred damage in the path of Hurricane Irma’s travels.  The images I have seen coming out of the Florida Keys is overwhelming and I cannot begin to image how someone begins to clean up their home when there is a boat in their living room.

So my blog today is just a reflection on Key West prior to Hurricane Irma and her relentless path of destruction.

Exploring Key West – I love Key West for it’s laid back, easy going shorts, tee-shirts and flip flops kind of feeling.  There is always an excitement in the area and as the weekend approached things got kind of hectic on the streets.  We were doing our 30 minute walk about on a Friday morning. 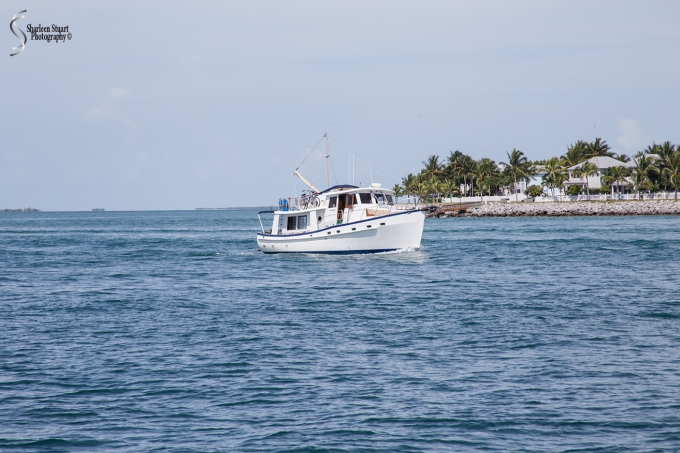 Fishing boats were out in the ocean

A lady was selling decorative umbrella’s on the street corner.

A cruise ship was docked in the harbor.  These boats are huge and I felt so insignificant next to it. 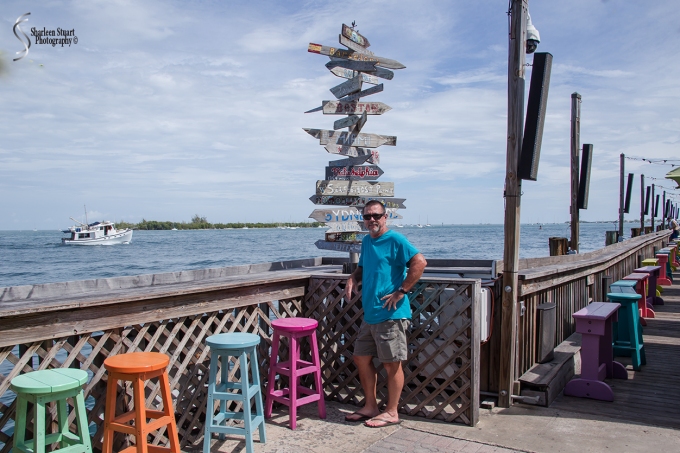 Along the waterfront – this is Key West. 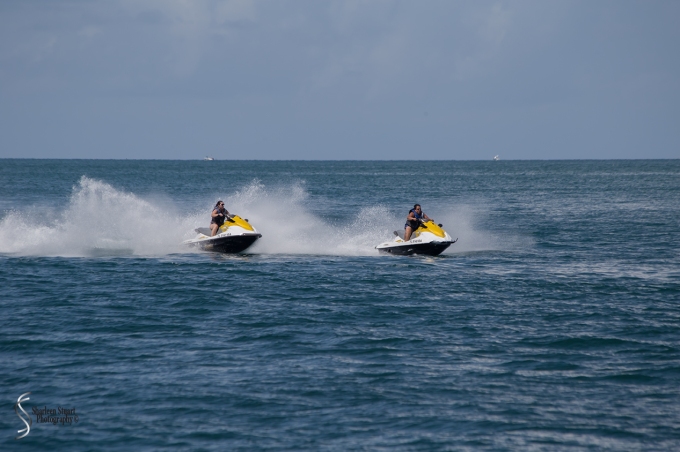 Jet ski’s are out in the playground of the ocean

A common sight in Key West. I hope they survived the storm surge.

Key West Aquarium – we overlooked some of the display area and I could see a sting ray swimming around.  Not sure how much more there is to the aquarium . 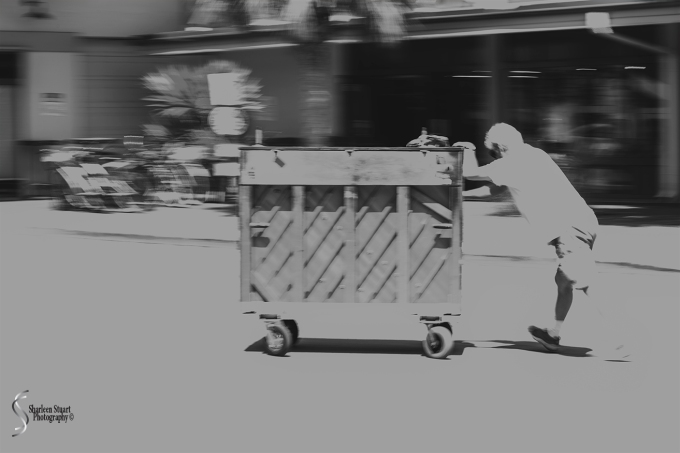 Impromtu photo of a man pushing a piano up the main street in Key West.

Interesting characters of Key West – Key West is famous for their Hemingway cats which I believe have 6 toes instead of 5.

Live music out on the streets and there is nothing nicer than listening to kettle drums.

A resident of Key West hanging out enjoying the flow of visitors and engaging with a few of them. 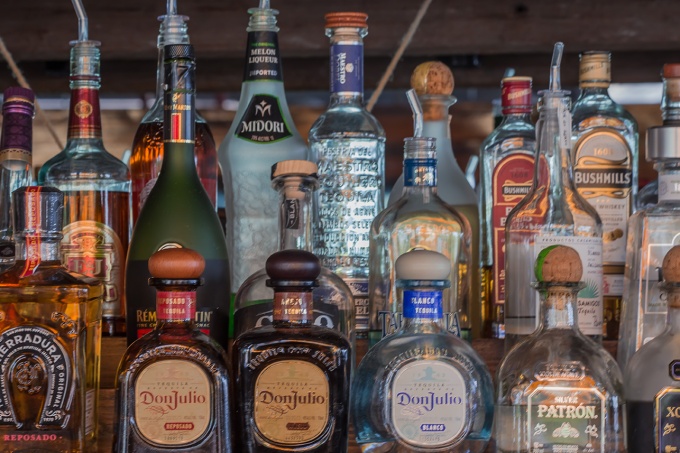 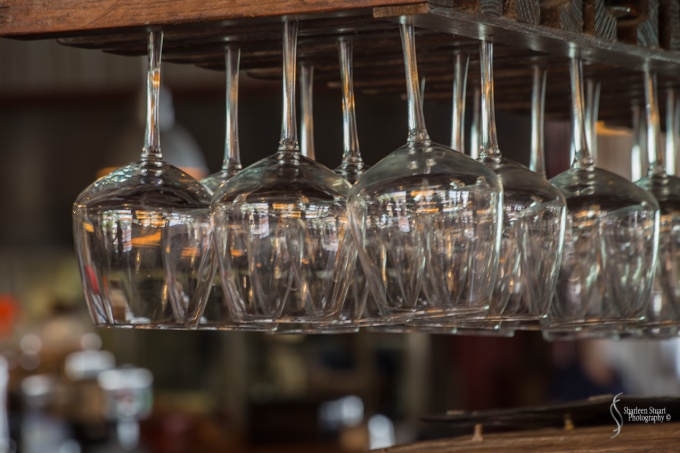 Time for happy hour or rather our lunch break, beers and calamari.

These are the scenes you will find as a norm in Key West.  I hope that Key West will be up and running again as quickly as possible and have not sustained excessive damage.  I read that the hotel we stayed in had sustained minimal damage and the cruise group that we used said their boats had survived the storm and that they were doing clean up of their areas.

Clean up in the Florida Keys is going to take a long time.  Clean up in the islands is going to take a long time.  Folks are hurting.  Hearts are broken.  Lives are devastated.  If you are able to please consider donating to a well established organization where the majority of the funds received go to the restoration of the area.  There is huge needs all over.  I am extremely grateful that we survived, and I pray that the people who have been so seriously affected by this storm will in time find rest and peace and begin to start their lives again.

In the meantime, as the days move forward we now keep an eye on Tropical Storm Maria who appears to be gaining strength and could well become a hurricane, and Tropical Storm Lee.

Thank you for joining me for this month’s 30 Minutes in Life.  Please take time to visit my friend and fellow blogger Sonia of Sonia Epple Fotografie and see what she has for you this month.   Keep following the circle to see what the other photographers, from the US and around the world,  have shared this month. Don’t forget to leave a little love on their pages.  To see more of Sonia’s work you can go to her Facebook page to check it out.

More Photos
"Photography takes an instant our of time, altering life by holding it still" ~ Dorothea Lange
I recently had the opportunity to do a maternity underwater shoot. First time ever. We used a GoPro for the underwater camera. One thing I learned it’s not easy to get the perfect shot we took over 200 images for this one photo. #sharleenstuartphotography #underwaterphotography #underwater #underwatermaternity #underwatermaternityshoot #pregnant
“The earth laughs in flowers.”
Marco Island is well known for it's shelling beaches and we spent a bit of time there walking along the gorgeous white shell laden beaches. Check out the blog up on the web at sharleenstuart.com.
Beautiful sky tonight out on the ocean. Property if Sharleen Stuart Photography. #sharleenstuartphotography #sharesix_summersun #sunset #sunsetloverssunsetphotography #sail #sunsetsail #crusingthebay #schoonerfreedom.
“Ô, Sunlight! The most precious gold to be found on Earth.”